BONECO ESP-Filter - the latest technology in your home - Boneco

The latest technology in your home. Another highly efficient and sustainable filter.

With the BONECO ESP filter, after intensive research and development, we have succeeded in developing a highly efficient filter that lasts 3-5 years and is also easy to wash. We are proud that we are not only saving our customers' money, but also taking care of the environment at the same time.

The smallest suspended particles in the air are electrically charged by the negatively charged ions released into the air. These charged particles are then attracted by the positively charged metal plates contained in the ESP filter and thus drawn out of the air.

This means that you do not have to imagine the air filtration as a net in which particles from the air get stuck, but that the charged particles are attracted like magnets by the filter plates and get stuck there.

Electrostatic filtration is composed of 2 functions:

Particles are electrostatically charged by ionization.

Separation is achieved by the static attraction of the charged particles from the electrostatically oppositely charged filter plates.

HOW TO MAINTAIN A HIGH FILTER PERFORMANCE

Through regular cleaning, the filter performance remains constantly high during the entire period of use and does not lose performance from the first day on like a conventional filter.

In order for the BONECO ESP filter to maintain its effectiveness, it must be cleaned from time to time. We recommend a cleaning interval of 2-4 weeks depending on the intensity of use. Contamination is relatively easy to see on the filter. The filter should be cleaned at the latest when the static crackling noise that can be heard when the device is switched on does not disappear even after 5 - 10 minutes. The ESP filter can be cleaned by hand under running water or in a dishwasher.

HOW TO HANDWASH THE FILTER

HOW TO WASH THE FILTER IN THE DISHWASHER 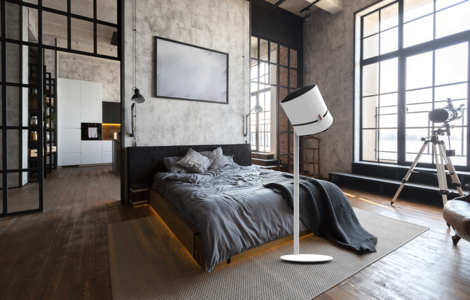 The Clean & Cool Fans combine the refreshing feeling of the BONECO air shower effect on a hot summer day, with the benefits of clean and healthy air from a purifier.

We use cookies to personalise content and ads, to provide social media features and to analyse our traffic. By using our services, you agree to our use of cookies. See more